Heraldic Cross designs where created at a time when fighting men on a battlefield did not wear uniforms.  In order to distinguish between friend and foe it was important for a warrior to know under which banner he fought and also the banners of the enemy. We find heraldic crests on both shields and armour as well as the standards and banners carried into battle.

During the first crusades there was one significant addition to the heraldic designs which was the addition of a cross. Many divisions of Christian armies would distinguish themselves by different designs and colors of crosses. Since then we have documented more than 1600 heraldic Cross designs.

The terminology for the crosses is both complicated and confusing.  The Cross of St James (1.) is basically a Fleurie cross due to the floriated (flowering) arms.  However it is also fitched since it has the lower arm pointed. This meant that it could be driven firmly into the ground at times of prayer.  It could also be used as a makeshift shrine to mark a fallen warrior.

The Fleurie Crosses are usually based on the lily. Christians regard the lily as a symbol of chastity, innocence and purity.  The fleur-de-lis cross (2.) shown here also alludes to the barbed ends of fighting spears.

Other Heraldic Cross designs are based on symbols that predate Christianity. One such is the Ankh Cross (3.).  This is a development of the Tau (4.) an ancient symbol that was later described in heraldry as Crux Commissa. With the addition of its looped top the Ankh looks like a person standing. It also closely resembles the high water markers placed in ancient times along the banks of the Nile River.  The flooding of the Nile brings fertile soil and new life.  The Ankh Cross therefore remains a symbol of rebirth and life to this day.

The Caduceus (5.) is a medical Cross. Because the snake sheds its skin revealing a new body it has become a symbol of rebirth. Asclepius (son of Apollo) a Greek deity associated with healing used the symbol of a staff with a snake wrapped around it. The staff represents authority and the snake rebirth.  The Caduceus is similar with a staff and snakes and was the sign of the Greek god Hermes. It is the ancient symbol for Mercury and later was associated with the alchemists. The Christians associate the staff and snake with the story of Moses lifting a snake with his staff.  A 15thC German coin known as a Thaler bore a snake on one side and a crucifix on the other.  Over time this coin ended up in England and the pronunciation changed Thaler to dollar and indeed the dollar sign depicts a snake and staff. $

Though heraldry in Europe began under Henry I in 1127 there are signs that the Jerusalem Cross (6.) is one of the earliest examples of a European heraldic design as we can see it on the Bayeaux Tapestry on the banner of Count Eustace during the 1066 invasion of England. Pope Alexander II may have been given him this Cross for supporting the Normans. The Jerusalem Cross is often referred to as the Crusader’s Cross as it was on the Papal banner given to the crusaders by Pope Urban II in the Middle Ages. There are various interpretations of the meaning of the design but it seems very likely that it is in fact a combination of the ancient Greek Tau (4.) and the Greek Cross (7.) 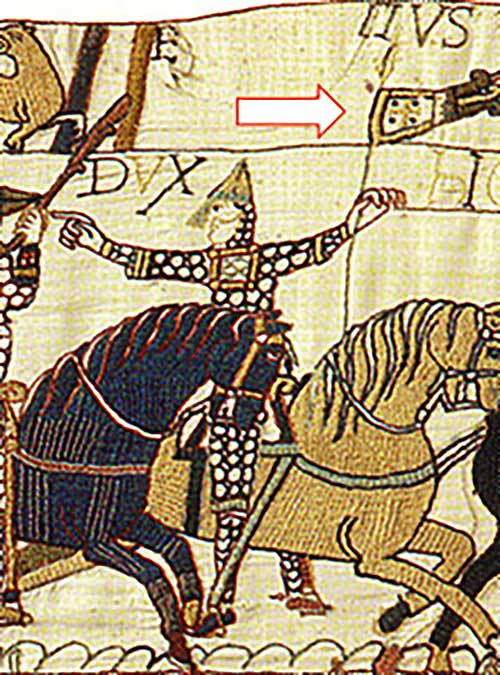 The Cross of Lorraine

The Cross of Lorraine (8.) is exactly the same as the Patriarchal Cross and in Spain is known as the Cruz de Lorena. The Patriarchal Cross is the heraldic emblem of an archbishop. It was used by the Knights Templar and was superimposed on the French flag to denote the Banner for Free French Forces in WWII. The Cross of Lorraine is also associated with various health organisations notably the International Union Against Tuberculosis.

Various Crosses are generated from the original heraldic style of Patte or Formee (9.).  Pattee is the French for paw and refers to crosses with splayed arm ends. A common variation is to have the splayed arms meet in the center as triangles and this is well described by a collection of crosses under the title Maltese Crosses (10.).  In heraldry triangles refer to arrows so designs with many triangles will surely point to the use of archers.

The Rosy Cross happens to contain ancient occult phallic symbols; the rose representing female and the cross, male.  It was created to honour a German nobleman and former monk named Christian Rosenkreuz (1378-1484). He considered that he could experience God better through nature rather than a person elected by mankind, i.e. the Pope. For 2 centuries the Fratres Rosea Crucis kept their sect secret. However in the 17thC France the intelligencia and educated population of the time discovered it and it became very popular in the times of Louis XIV. In the 18thC some Freemasons aligned themselves to Rosicrucianism and incorporated the Rosy cross into their emblem.

All these and many other crosses or elements of them can be found in heraldic designs.  We find that the variety makes for a rich resource for our ring, cuff link and pendant designs. We often incorporate crosses into our custom designs. I have introduced you briefly to a few of them here and am grateful to http://www.seiyaku.com/customs/crosses/index-all.html for providing a well documented directory of crosses.