Silver is money. In French, Thai and many other languages, the words for ‘silver’ and ‘money’ are the same. Most currencies denominated in pounds (or livres, lira etc.) were based on a troy pound (= 12 troy ounces) of silver. Norman silver coins in 11th Century England often had stars on them (ster) and gradually, sterling (small star) became synonymous with a guaranteed level of purity (nowadays 92.5%). British pounds are still referred to as ‘sterling’.

In Spanish, the phrase ‘valer un potosí’ means to be worth a fortune. However, even many Spaniards would not know why. Potosí was once easily the largest city in the Americas, with over 200,000 residents, making it in fact one of the biggest (and richest) in the world. At 4090m above sea level, it remains one of the highest cities in the world. For centuries, it was the location of the Spanish colonial mint. In 1572 they built the original mint on the site of the Casa de Justicia. The present National Mint is now a fine museum. The museum highlights the world’s first global currency. However, despite the huge human tragedy that took place here it features hardly at all in the mental maps of most of us today.

The Potosí Silver Mine Today

Potosí, now in modern-day Bolivia, was part of the viceroyalty of Peru. In 1546 the Spanish founded the city next to the Cerro Rico (Rich Mountain). It was thought to be made almost entirely of silver ore. Once mining started, it produced over 45,000 tonnes of pure silver over the following 240 years. 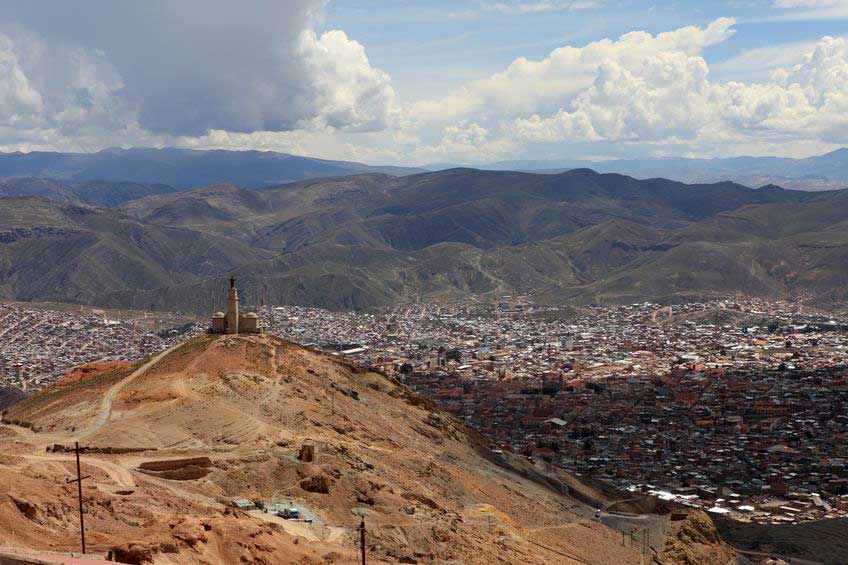 Today, Potosí still produces silver – though in much smaller amounts. An extraordinary number of mine tunnels run throughout the mountain and reach to depths of 1,150 metres (3,770 ft). It must have been, and still is, a hellish place to work.

The Mountain that Ate Men

This wealth was mined at huge human cost. The Cerro Rico has been named ‘The Mountain the Eats Men’. At first, the Spanish used Inca ‘contributed’ labor (an interesting example of a 16th Century euphemism) to mine and process the ore. It is thought that between 10,000 and 20,000 of these laborers died each year. This was due to both the physical and chemical dangers involved. Silver ore was processed by cold-mixing mercury with the ore using bare feet. Mercury poisoning killed most workers within months.

Once Inca labor was running short, the conquistadors started to import black African slaves. They soon realized that the mules used to pull carts out of the tunnels died after a couple of weeks. So they substituted twenty slaves for four mules. The slaves died just as quickly. But they were cheaper. In total it is estimated that some 8 million workers died in and on the Cerro Rico between 1546 and 1824. 45,000 tonnes for 8 million lives. Do the math, as they say. (In case that’s not your forte, each tonne of silver cost 178 lives.)

The effect of Potosí on the world economy

Apart from the human death toll, there was an economic price to pay, too. Monetary systems across Europe were based on the price of silver. These huge tonnages of ‘pieces of ate’ from South America constituted a significant increase in the supply of silver in circulation throughout Europe. This caused inflation. Estimates vary, but it is thought that the average peasant in England and in the Low Countries in the mid 16th Century earned between two thirds and a half (in real terms) of what had been normal 50 years earlier.

Potosí’s silver was therefore not only produced at enormous human cost, but cost innumerable lives on its passage back to Europe (through piracy) and on its arrival (inflation).

Very little silver is used for minting coins today. And indeed only about a fifth of the world’s annual production is used for jewelry. The rest is used for photography, electronics and other industrial processes. Today, it is mostly produced ethically and cleanly.

At The Regnas Collection we use silver in our jewelry because of its bright color, malleability and durability. We also often plate it with a few microns of gold.

However, every time I wear my grandfather’s silver cuff-links, I wonder whether it came from the mountain that ate men.