The development of cufflinks is closely linked to the changing styles of shirts. It was after the Middle Ages that decorations were added to the areas of shirts that are on display. These were the front, neck and sleeve areas. They took the form of embroidered patterns, frills and ruffs.

The shirt as we know it today was developed in the 16th century. It has always been a requirement that the opening at the end of the sleeve be wide enough to accommodate the hand when putting it on. After dressing it became fashionable to close this gap initially using colored ribbons. The neck was also closed in this way and we see that the colored ribbons gave way to the necktie in later times.

It was during the reign of Louis XIV that we see the first cufflink designs. Sleeve buttons or ‘boutons de manchette’ initially consisted of glass buttons joined by a short chain. Over the following years they became more and more sophisticated. In 1715 we find examples of jeweled diamond studs joined by gold chains.

The rise and expansion of the new working classes meant that it was not only the aristocracy that could indulge in fashion. The norm was a formal suit during the day.  In the evening finer dinning or dinner jackets and even more formal tailcoats were popular. This was a time of stiff, starched collars and cuffs and it was hard to join or attach them with buttons. This is when cufflinks really came into their own along with shirt and collar studs. Initially diamond, gold or silver studs were used. The Prince of Wales who became Edward VII changed all that. He was fond of colorful Fabergé links and the use of gemstones became popular from that time on.

New mechanized manufacturing techniques evolved during the industrial revolution. This meant that many variations of attachments became possible. Mass production also meant that cufflinks were affordable by a much wider group of consumers.

The swivel bar and post was very popular. It was easy to attach to heavy starched cuffs. When closed the swivel penetrated the button holes easily and could then be opened to secure the links and the shirt cuffs. The swivel sections come in a variety of designs. Bullets are somewhat triangular in shape with a useful pointed end when closed. The whale back is a flatter option. Another popular style includes a cylindrical baton that swivels. 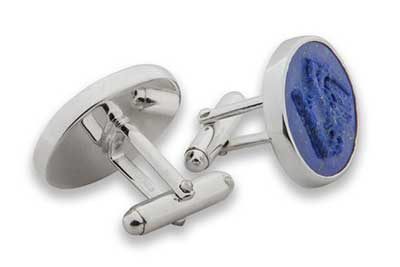 Other systems used a smaller oval attached to a much larger one by a chain or even a single link. The smaller oval could be inserted through the button holes leaving the outer large oval on full display.

Another popular style is to join two cylinders of precious metals or gemstones with a short chain. The cylindrical nature makes it easy to get through the button holes and they look very smart. 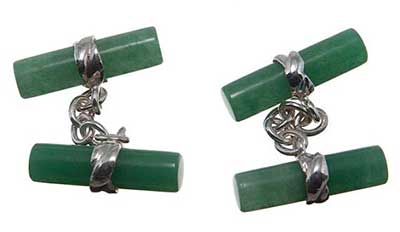 In the 20th Century mass production of shirts used the fixed button and button hole style and cufflinks were worn less on a day to day basis. Shirts worn for more energetic occupations at work or during leisure were better suited to the fixed button and button hole system. During the shortages of the Second World War virtually no cufflinks were produced. However when these shortages ended in the 50’s men started to enjoy fashion accessories again. Cigarette cases and ornate lighters, tie pins and bars became popular. Cufflinks enjoyed a revival with many new designs and materials being employed.

The 60’s generation seemed to turn its back on formal wear and casual became the norm. There was a time then when we wondered if cufflinks would ever be popular again. We need not have worried as there has been an inevitable return to smarter fashion. People are always looking for new ways to show their individuality.

Cufflinks are long lasting and are therefore often given as gifts on special occasions. On such is Wedding cufflinks. Both Father of the Bride cufflinks and Groomsmen cufflinks are popular. They are useful ways to commemorate most lifetime events. Cufflinks are a traditional gift to young men as they move into adulthood at bar mitzvah and confirmations. They are given on special birthdays and family events. Cufflinks make the perfect gift because they will always provide a lasting memory of the occasion. 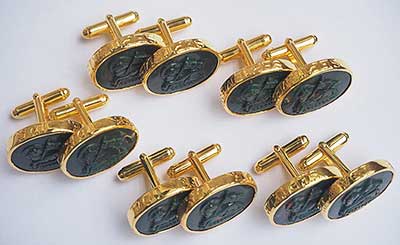 Many people wear cufflinks as a way to show their own personality and style. Perhaps the most obvious example would be monogrammed cufflinks. Other engraved cufflinks include Family crests and other esoteric designs. In fact there has never been a better time to look to cufflinks for a way to stand out from the crowd. There are many individual jewelry designers today. They have been able to compete largely due to the internet. It has allowed smaller businesses to get a shop window to display their craft. At Regnas Jewelry we pride ourselves on attempting many intricate and unusual requests for custom cufflinks. We love to work with our customers to produce very individual and unique pieces.

You can use the Regnas Custom Cufflinks designer webpage to send us your cufflink designs. We will always do our best to make your dream jewelry come to life. 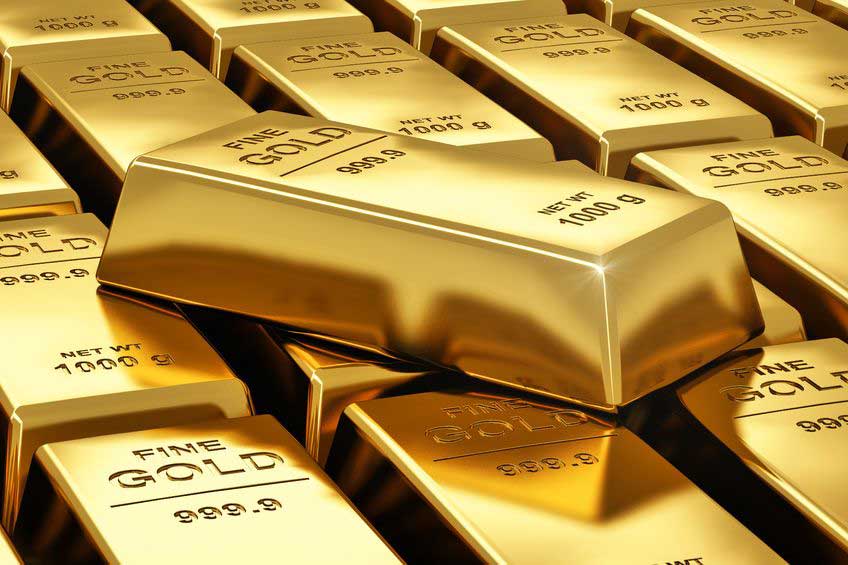